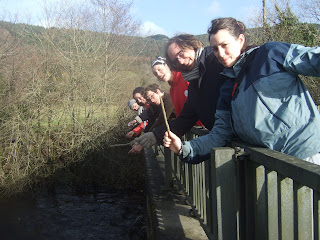 On friday the 23rd of Jan holly and I hired a car and set off. After a journey full of reggae and one wrong turn we wound our way to Tim's house near Llandovery. It was great to see all of the faces that turned up, as we are rarely all in the same place at the same time.

We drank drinks, ate food, went on walks, designed democratic benches, animated a swede, inspected the stream, found a fox skeleton, skimmed stones, played pooh sticks, explored the hollow trunk of a giant tree, took turns on the swing, played backgammon with the wrong rules, table tennised, firestarted, marvelled at green electricity, photographed each other in a million different lights, had erratic outbursts, planned plans, laughed at jokes, played intruments badly and well, levitated a stick and spoke about the year ahead around the kitchen table.

When sunday night came around, we left again feeling that everything was probably fine.
Posted by Chris Murray